These are instructions on how to build Code::Blocks under Apple Mac OS X.They have been tested under Mac OS X version 10.4 (PowerPC and Intel),and should work similarly on the newer Mac OS X 10.5 and 10.6 as well.

We will be building everything from scratch using the source code, andnot use any available package managers likeMacPorts,Fink,Gentoo orRPM.Packaging can be done later, once it has reached a more stable release.

Update: building for MacPorts can be found at the end of the document.

If they didn't come bundled with Mac OS X, get the Xcode Tools (or Developer Tools for older Mac OS X) from http://developer.apple.com/tools/ or from your install disk.

This will install Apple versions of:

Apple regularly pulls all older links in order to promote newer Mac OS X, but all theold developer tools can be downloaded from ADC at http://connect.apple.com/

You need a (free) developer registration with Apple first, in order to log in there.For Mac OS X 10.4, you want (at least) Xcode 2.2, since earlier versions were buggy.

Check what you have, with --version (note that GNU libtool is called 'glibtool' on Mac OS X)

Since it's now known as 'automake-1.9', it won't interfere with the regular 'automake'

If you would rather have the new version to be called when calling 'automake', let it install into /usr/local and put /usr/local/bin before /usr/bin in your PATH.

Download libtool source. The following instructions will overwrite your current version of libtool with the one you just downloaded.

Note that this will replace the system version of glibtool, which might have some compatibility issues with building other software.

If you are building for Mac OS X 10.4 or later, you might want to build 'Universal Binaries 'These are binaries that contain code for both PowerPC ('ppc' arch) and Intel ('i386' arch)

The basic flags that needs to be added are:

(You only need the sysroot parameter on PowerPC Macintosh, not on a Intel Macintosh)The '-arch i386 -arch ppc' is what tells the compiler to build a 'universal' (or 'fat') binary.

When building for older versions of the SDK, you want to make sure to use the same compiler.

When Code::Blocks (and requirements) has been updated to use wxOSX/Cocoa, then a 64-bit version might be built too.

To avoid having the Code::Blocks user having to compile or install wxWidgets themselves,we can bundle it with our application so that it is contained in the application bundle.This could also be done by statically linking wxWidgets, but with dynamic linking we canshare the wxWidgets library between all applications using wxWidgets (not just Code::Blocks)

To bundle our shared library with the application, we include it in 'MacOS' and change the path:

To bundle our framework with the application, we include it in 'Frameworks' and change the path:

This way it will first look in the framework path (-F), and then in for the shared library path (-L) as usual.

On Mac OS X 10.4, you need to install the Subversion (svn) program:

Note: you need SVN for the Code::Blocks revision scripts to work!

You might need to convert line endings from DOS to Unix first.

You need to use the newer version of automake (see above), for the 'bootstrap'. (OS X 10.5 users may have recent enough autotools so they may not need to install them)

If you have the Mono.framework installed, then it probably set up a symlink like:

Unless you have a 'proper' pkg-config installation the Code::Blocks configure will fail, so move this symbolic link aside.

Note: the easiest way to build a Universal Binary for Code::Blocks is to build once for PowerPC (-arch ppc) and once for Intel (-arch i386), and then merge them (with lipo) afterwards.

Note: You need to patch the location of the pre-compiled headers, or it will generate them in the same place for both arch.

To work around this, you need to edit the generated 'libtool' script manually:

This bug has been fixed in GNU libtool 1.5.8 and later.

For the Universal Binary build:

'sudo' asks you for an admin password, in order to get install permissions

For the Universal Binary build:

Where 'lipomerge' is a custom shell script:

After building codeblocks in the regular Unix way, you need to bundle it with the iconsand various other info that it needs to make a regular stand-alone Macintosh application.

There are two ways of accomplishing this, old Mac OS-style resource or NeXT-style bundle.The old resources are handy while developing, while bundles are more suitable for release.

Note: You need to use either of these methods, or your application will launchin the background behind all other windows and will be unable to receive any events!

Handy while developing, as you don't need to create a whole bundle.

First we install the program to the PREFIX directory of your choice:

Note: on the Intel Macintoshes, the icon comes up as 'broken'(apparently it assumes that all apps with resforks are Classic)

Start the application with a small prefix shell wrapper like this:

You don't need the 'DYLD_LIBRARY_PATH' stuff,if you are installing to a system directory.

This does not involve resources, and is more relocatable.

The MacOS program will just be a shell wrapper that calls 'bin/codeblocks', like above.Traditionally the bundle would include Frameworks and Resources, but we'll just avoid thosehere and use the regular 'lib' and 'share/codeblocks' instead (just as with a regular install). These temporary directories are listed in italic below, they're not really used in bundles..

Setup a hierarchy like this, and copy the files from the regular build/install and the above file list to it:

The CodeBlocks application can now be moved with the Finder, and started up like a regular Mac application. (the nightly build includes a more advanced Info.plist and more icons - for also mapping all the files that the application can open, like source code and header files and such)

To avoid having to use a DYLD_LIBRARY_PATH, we rename the shared libraries (with the install_name_tool program) from e.g. /usr/local/lib/ to @executable_path/:

The libraries can have their names changed using the -id parameter:

You also need to change all of the loadable bundles for the plugins:

You can check the result, what libraries/frameworks it links to, with:

Optionally you can then repeat the process, for the wx library too..

Here is a full script to do the job.. It assumes to be executed at the same directory level as the CodeBlockSVN.app directory that will receive all the stuff.. maybe enhanced but it is a first try that do work when packaging an OS X SVN build.

'Darwin is the UNIX technology-based foundation of Mac OS X.'

'Pure Darwin' here refers to the Open Source version of the OS:

(that is: Darwin using X11 instead of Aqua for the user interface)

You will need the wxWidgets library, install as port with:

If you want the X11/GTK version on Mac OS X, instead use:

After that is installed, you can install Code::Blocks with:

If you want the X11/GTK version on Mac OS X, instead use:

This will download the SVN trunk, and any dependencies:

Note: to upgrade from SVN, you need to uninstall first:

This is both because all SVN versions are numbered '0',but also due to a bug in the Code::Blocks build scripts.

After the build completes, you can start the program by:

Note that the wxMac application bundle in 'MacPorts'is just a wrapper, with symbolic links to /opt/local..

The non-bundled wxGTK version is instead started with:

When running X11/wxGTK programs in Mac OS X, you can use'open-x11' to first start up X11.app and set up $DISPLAY:

Best C Compilers: For most beginners of programming choosing a user-friendly C or C++ compiler is challenging enough. The fact is many programming languages that have evolved through different OS environments are not enabled with the ability to bear current day computing parameters.

With Eclipse you get advance functionality for programming in C, C++ on an open-source platform. This IDE is really a simple to use IDE, perfect for anyone new to programming. It comes packed with impressive features including a debugger, auto-code completion, syntax highlighting etc.

It is supported on Linux, Mac OS X, and Windows. For compiling the Java run-time environment needs to be functionally operational on the PC.

This is a cross-platform extensible and open source IDE compatible for C++. The IDE can be extended with help of different, available PLUGINS. The IDE is fully configurable and can be downloaded through several ways.

Downloading the setup file for the binary release you can run it on the PC. Alternately download a nightly-build, source code or retrieve source-code from the SVN.

It’s free and has both GUI and command-line versions. Digital Mars is convenient to use for its quick link time and efficient compile.

Though small C-Free has brilliant features and can be considered as an alternative to the traditional Turbo-C compiler for developing C++, C programs and for supporting many other compilers as well.

The compiler comes in a 30-day free trial version but for using it long you have to buy it.

This IDE is a multi-view, multi-project and multi compiler for C++ that supports multi-profile compiling in a number of languages including JavaScript, PHP, and Java. It supports Mac and Linux. 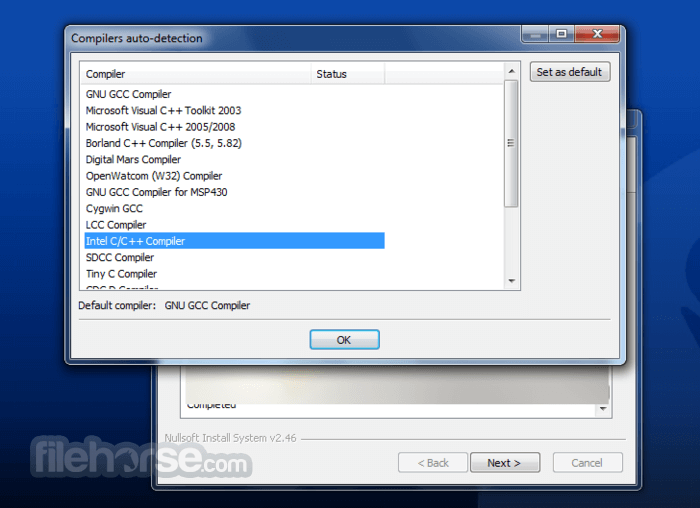 Comprising of a group of tools for programming to cater to native windows apps MinGW has a GCC port like C, ADA, Fortan and C++ compilers.

Functional for Windows, Mac OS, and Linux OS Codelite is an open source and cross-platform IDE compatible for C++ and C.

This is not a free IDE but the fact that it’s quite a powerful and intuitive editor for source code manipulations works to its favor.

With a set of different libraries like SQL, GUI, Ultimate++ works well with MinGW, Visual C++, and GCC and is used by C++ programmers for good productivity output. It is cross-platform and a RAD IDE.

So those were some of the best C Compilers for Mac and Linux PCs.