The Mac OS Extended Format (HFS+) is a volume format compatible with Mac OS 8.1 and higher, including Mac OS X. In terms of volume, folder, and file size limits, it is similar to the Macintosh Standard Format (HFS).
HFS+ or HFS Plus is a file system developed by Apple Computer Inc. to replace their Hierarchical File System (HFS) as the primary file system used in Macintosh computers (or other systems running Mac OS). It is also one of the formats used by the iPod music player. HFS+ is also referred to as Mac OS Extended Volume Hard Drive Format, where its predecessor, HFS, is also referred to as Mac OS Standard.
HFS+ is an improved version of HFS, supporting much larger files (block addresses are 32-bit length instead of 16-bit) and using Unicode (instead of Mac OS Roman or any of several other character sets) for naming the items (files, folders) - names which are also character encoded in UTF-16 and normalized to a form very nearly the same as Unicode Normalization Form D (NFD) (which means that precomposed characters like é are decomposed in the HFS+ filename and therefore count as two characters and UTF-16 implies that characters from outside the Basic Multilingual Plane - often seldom used and characters from ancient writing systems - also count as two characters in an HFS+ filename). HFS Plus permits filenames up to 255 UTF-16 characters in length, and n-forked files similar to NTFS, though until recently, almost no software takes advantage of forks other than the data fork and resource fork. HFS+ also uses a full 32-bit allocation mapping table, rather than HFS’s 16 bits. This was a serious limitation of HFS, meaning that no disk could support more than 65,536 allocation blocks under HFS. When disks were small, this was of little consequence, but as larger-capacity drives became available, it meant that the smallest amount of space that any file could occupy (a single allocation block) became excessively large, wasting significant amounts of space. For example, on a 1 GB disk, the allocation block size under HFS is 16 KB, so even a 1 byte file would take up 16 KB of disk space.

How do I know a hard disk is HFS+ format?

Select the hard disk in the Finder and choose the Get Info command in the File menu. The format information will specify either Mac OS Standard (hfs) or Mac OS Extended (hfs+).

What are the differences between HFS+ format and HFS format?

The most visible difference between HFS+ format and HFS format, other than the minimum file size, is the maximum number of files.

I'm deciding to install MacOS High Sierra on my Mac this autumn. So, if I find APFS not useful, is it possible to convert APFS back to HFS+ via terminal or using Disk utility?

Hfs Plus For Mac Os

If you upgrade to macOS Catalina 10.15, Mojave 10.14 or High Sierra 10.13, the solid-state drive (SSD) will be automatically converted from HFS/HFS+ to APFS and there is no opt-out. However, even though the APFS file system is optimized for HFS+ with many advanced properties, many Mac users cannot get used to APFS and want to convert APFS back to HFS+. It is undeniable that APFS does come with some limitations and brings users troubles like drive corruption after converting from HFS+ to APFS.

Then you may ask, is it possible to convert/revert APFS back to HFS/HFS+? The answer is 'Yes' but with some precautions. This page will list what you should know when you revert or convert APFS to HFS/HFS+ and provide the details about the best APFS to HFS converter with no risk of losing data.

Notes on converting APFS to HFS/HFS+

Hfs Plus For Macbook Air

First, as you may have noticed, there is a new concept called container in APFS. A container is the basic storage unit for APFS and each APFS container contains one or more APFS volumes. One of these APFS volumes will have macOS and each volume could have different APFS type: APFS, APFS (Encrypted), APFS (Case-sensitive) or APFS (Case-sensitive, Encrypted). As a result, there are some rules when you convert APFS to HFS/HFS+:

What's more, you need to know that converting APFS back to HFS+/HFS will format your SSD and erase all data on it. Thus, please make sure you have a backup copy of the APFS container or the whole drive. If you already backed up your data on this SSD drive, read Part 1 to learn details about how to convert/revert APFS back to HFS. Nevertheless, if you have lost something important when you convert APFS to HFS+, you can skip to Part 2 to recover lost data after the conversion from APFS to HFS+.

How to revert/convert APFS to HFS+?

Disk Utility is a built-in tool that can manage internal and external storage devices, including partitioning and formatting your disks, creating disk image, checking and repair disk errors, etc. So, you can convert APFS to Mac OS Extended (HFS+) with this natural APFS to HFS+ converter - Disk Utility.

Attention: This process is destructive to your data on the APFS container/drive. So please check again if you have a backup copy.

Step 2: Select the drive that you want to convert/revert from APFS to HFS+.

Step 3: Click Erase on the top of the Disk Utility window.

Step 4: Complete the required name, select Mac OS Extended (HFS+) as the new format and then click the Erase button.

When the process finishes, you'll get a clean HFS+ formatted drive and you can then copy back your data. 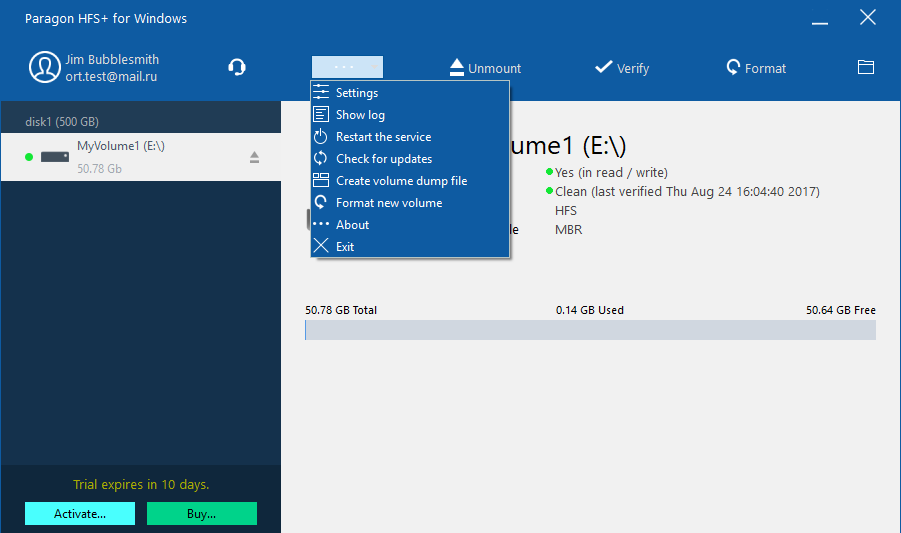 The Command line, or known as Terminal in macOS, is a powerful, text-only method for interacting with your Mac computer. If you are an experienced Mac user, using macOS's built-in command line would be an appealing way to convert/revert APFS to HFS+.

Step 2: Type diskutil list and find the identifier of the APFS container.

Step 3: Typediskutil eraseDisk JHFS+ 'the disk name' /dev/'the identifier'. This process will wipe all the files in this APFS container and convert it back to APFS.

How to recover lost data after reverting/converting APFS to HFS+?

Hfs Plus For Macs

If you get into problems during the process of converting APFS to HFS+/HFS, such asHFS+ partition corruption, , or have lost data due to mistaken APFS to HFS+ conversion, you can recover lost data with iBoysoft Data Recovery for Mac.

Step 2: Choose the drive that you lost files when you converted from APFS to HFS+, click 'Next' to scan for lost files on it.

Step 3: Double-click to preview the searching results and make sure the data integrity.

Step 4: Choose files you want to get back, click 'Recover' and save them.

Hfs Plus For Macbook Pro

The newest default APFS for macOS Catalina/Mojave/High Sierra and later is not necessarily the best for Mac users. If you need to downgrade APFS to HFS+/HFS without data loss, backing up your data and reformatting your drive is always the safest choice, while if you are interested in new features in APFS, you may also want to knowhow to convert HFS to APFS on Mac . Just go and check it out!